It is a truth universally acknowledged that eye cream is pretty darn important. Well, amongst women over the age of 20 and who are not yet octogenarians, anyway. And so for most women, there is an ongoing hunt.. wading through the bombardment of products, sorting the preposterous from the possibly effective from the totally useless and always looking for the elusive holy grail that will confer eternally fresh-looking, unpuffy, line-free eyes.

By the time you’ve been in the market for a few years, you begin to get more realistic. A skincare product by itself is obviously not going to work miracles if you happen to have, say, consumed large vat of champagne and not gone to bed until 4am. Or been drinking too much coffee and then woken up with dark circles that look somewhat like you’ve been punched in the face.

However as I discovered a few years ago, there are some things that are realistic to look for. Entirely natural ingredients certainly, so that one isn’t dosing up with unnecessary chemicals; an un-irritating formula (for those of us who are clumsy – no eye stinging or watering), at just the right consistency that melts immediately into skin; wears perfectly under makeup – it absorbs so completely into the skin that it will never ball or interfere with foundation application on top; and leaves skin perfectly moisturised all day and night until makeup is finally removed and you collapse into bed. My first foray into Dr Hauschka eye care with the Daily Hydrating eye cream achieved just these results. Using the comfortingly protective Eye Balm on top as an added boost when needed and in winter (a gem for cold climates, and a totally unique formulation), I also began using the Regenerating eye cream when it was released, and the initial results never wavered.

Having now used either the Daily Hydrating eye cream or the Regenerating eye cream every day for around the last 9 years with the Eye Balm as a constant addition throughout, I’ve discovered the longer term effects they have can be subtle. Because you’re looking at your own face in the mirror every morning, you often don’t register the differences until you stop using them and try something else. Each time I would try out a different eye product for 2-3 weeks, I would consistently begin noticing fine lines appearing more visible and dark circles more harsh. As soon as I switched back to my Hauschka staples they would disappear again, so after a few of these misadventures I decided this was more than enough evidence with which to draw my personal scientific conclusions.

Face products have to perform reliably for me – I can’t risk a sudden reaction or outbreak, and knowing that on camera or in pictures any lines will literally be magnified, I’m incredibly grateful for having discovered natural eye products that work at such an early age.

Oh, and one more thing – I’ve decided that the packaging must somehow have been made ‘Mary Poppins’ style… as used every day each product will last months, even when you’re convinced there can be no more left in the canister to pump; and the Eye Balm clocked in at 6 months’ use last count. Which, of course, is great for the bottom line as well. 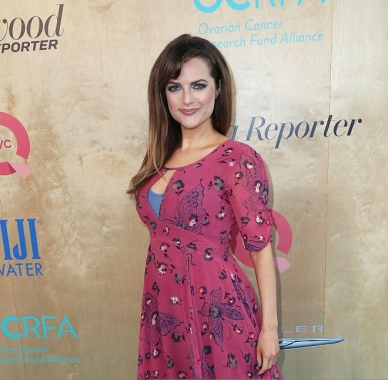 Makeup love 😍💋 by the talented Nicole Groch
So happy to finally be back on the socials! 🥰 and recharging in beautiful #costarica #puravida 🌺
Monserrate Palace.. the most magical place in Portugal by far ✨🌲! The palace is from a fairytale, the exotic gardens seem to go on forever, and an ethereal cool mist hangs over it all…
Can’t wait to get back to the magical @house_of_wonders
It’s been quite a while and so happy to finally be back! 😍 Such an intense time at the moment especially here in my beloved adopted country, the USA. Can’t wait to catch up with everyone and share all about my favourite beautiful, inspirational and uplifting things! 🌸💕
🐈Thrilled I’m looking super put-together in new shots cos auditions got me exhausted, stressed and not feeling any of it! 😩 #actoranxiety